The Carrizo Aquifer is a vast aquifer that stretches from the Rio Grande in South Texas to parts of Arkansas and Louisiana supplying water to more than 60 Texas counties. SAWS has five projects that produce Carrizo Aquifer water in and around Bexar County. The Local Carrizo Project is a SAWS-owned supply located on H2Oaks property in Southern Bexar County and began production in 2008. While SAWS can access up to 9,900 acre-feet per year of groundwater, the volume of water produced will vary year to year depending on the needs of SAWS customers. In 2021, SAWS produced 6,000 acre-feet which supplied approximately 24,000 households. SAWS purchases water from the Schertz-Seguin Local Government Corporation (SSLGC). This project began in November 2013. It was an innovative and cost-saving infrastructure-sharing arrangement with the SSLGC. SAWS is proud of the mutual benefits that this major public-public partnership has made possible. It eliminated the need to construct over 50 miles of pipeline, a new treatment plant, and two pump stations, thereby saving SAWS customers $88 million.

The SAWS-owned Buckhorn well-field project is located in Gonzales County and is permitted to produce up to 11,688 acre-feet per year. The well field began producing water in January 2014.

Together these two projects make up the Regional Carrizo Project. Combined, SAWS received 10,750 acre-feet in 2021, which supplied approximately 43,000 households.

The CRWA Wells Ranch Project is a water supply project owned and developed by the Canyon Regional Water Authority (CRWA). SAWS by agreement, can purchase up to 2,800 acre-feet per year from the Carrizo Aquifer in Gonzales and Guadalupe Counties. In 2021, SAWS received approximately 3,200 acre-feet of Carrizo water, enough to supply approximately 12,800 households in the Northeast San Antonio area. This volume is blended with surface water from Lake Dunlap and distributed to SAWS. (Reference Surface Water Projects for Additional information on the Lake Dunlap supply). 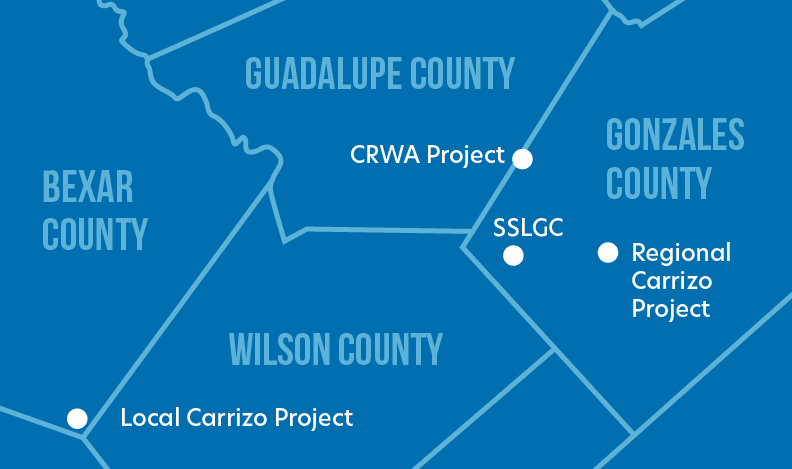 Water from the Carrizo aquifer makes up 30 percent of the water produced for the Vista Ridge Pipeline, the largest non-Edwards Aquifer supply in our city’s history.