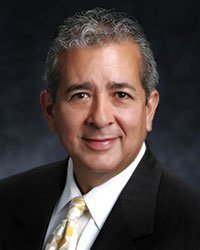 Robert R. Puente was appointed San Antonio Water System’s President and CEO in May 2008. As chief executive of one of the nation’s largest utilities, he provides leadership in delivering water and wastewater services to more than 1.7 million consumers, developing new water resources, continuing infrastructure upgrades throughout the community, and building regional partnerships.

Before coming to SAWS as the President/CEO, Puente served in the Texas House of Representatives. First elected in 1991, Puente was appointed to the House Natural Resources Committee, which develops water policy for the state. He became its chairman in 2003.

As one of the policy pioneers of modern water supply management in Texas, Puente has helped shape and steward key landmark regional water issues, including:

Since taking the helm at SAWS in 2008, Puente has led the organization through many historic financial and operational successes and is often called on to share these achievements throughout the United States and abroad. Recent highlights include:

Under Puente’s leadership, SAWS has focused on water supply diversification and innovation comprising:

In 1979, Puente received a bachelor’s degree in political science from St. Mary’s University. He received his Doctor of Jurisprudence from The University of Texas School of Law in 1982. Prior to joining SAWS, he practiced law as a private attorney and managed his own firm since 1983.

Puente is married to Carmen Muñiz Puente. They have three children.